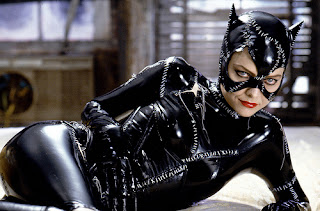 The movie has an April start and has been casting up, with Jackie Earle Haley, Eva Green and Bella Heatcote already on board.

Depp will portray Barnabas Collins, a self-loathing vampire living in a Maine manor who is searching for his lost love.
Pfeiffer would play Elizabeth Collins Stoddard, the reclusive matriarch of the Collins family which runs the Maine town. The character has not left the mansion since the disappearance of her husband a decade earlier.

Pfeiffer is finding herself very much in demand this new year. The actress is juggling a role in New Line's all-star "New Year's Eve" and is shooting "Welcome to People," the directorial debut of scribe Alex Kurtzman.

The last time she worked with Burton was in 1992's "Batman Returns" where she memorably played Catwoman.
Posted by Wendy, the NOT so good Witch at 7:43 PM