For many fans, David Tennant's incarnation of the iconic lead character was the best in Doctor Who's five decade history.

So they'll be in for a treat when he makes a special return for the show's fiftieth anniversary this year, alongside love interest and companion Billie Piper.

After months of speculation, the BBC have confirmed that the two stars will make an appearance in the one-hour special, which is due to air on November 23. Comeback: The BBC has confirmed that David Tennant and Billie Piper will return for the Doctor Who 50th Anniversary episode on November 23

The pair will star alongside the current Doctor Matt Smith and his newest companion played by Jenna-Louise Coleman, as well as a host of other stars from the show's past.
Reprising their roles at the Tenth Doctor and Rose Tyler, Tennant and Piper will be joined by British actor John Hurt in the 3D episode, the plot of which is yet to be announced.

Fans were left disappointed back in January, when Piper denied clams that she would be taking part in the landmark episode. Joining forces: Although the plot is being kept under wraps, it has been announced that Tennant and Piper will star alongside Matt Smith and Jenna-Louise Coleman Fan favourite: The pairing of Tennant and Piper was an instant hit with died hard Doctor Who fans back in 2005

When questioned about it during an appearance on The Graham Norton Show, she said: 'I wasn't asked, no.'
'I think Matt Smith may have said, in passing or in jest, it would be nice. I think maybe he said that and then it became something quite different, but no,' she added.

And show producer and lead writer Steven Moffat is also going to great lengths to protect the content of the special programme.

'One length I've gone to which is a really good security measure - I make sure I don't get a script, because I will lose it,' he said. 'I forbid people to hand me one. It's on my computer under lock and key.' On-screen chemistry: The stars, who played the Tenth Doctor and Rose Tyler, kept fans glued to the screen with their slow burning love story

Although current Doctor Smith has already been allowed a sneak peak: 'I read it and I clapped at the end. I think it's hilarious, it's epic and it's vast,' he told the BBC.

Tennant, 41, who is currently starring in ITV detective show Broadchurch, starred as The Doctor from 2005 until 2010, when Smith took up the role.

Piper also joined the cast in 2005, appearing for the first time opposite Christopher Eccleston, who played the ninth Doctor.

The news of the return comes as the first episode of the new series airs on BBC One on Saturday night. New blood: Coleman, who has already appeared in episodes, makes her debut as the Doctor's companion in the new series, which kicks off on Saturday

Posted by Wendy, the NOT so good Witch at 3:31 PM No comments: 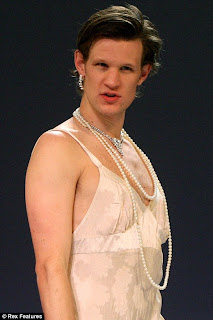 This was the first image if you type in Matt Smith Sexy.

'I shall show you no mercy': Dragon maiden Daenerys threatens enemies with fire in gripping new Game of Thrones trailer

It has been a wait almost as epic as the sword and sorcery saga itself.
But fans of Games of Thrones are going to be rewarded with the most dramatic season yet if the latest trailer is anything to go by.

It looks like queen-in-waiting Daenerys Targaryen is finally ready to reclaim the Iron Throne, with a little help from her dragons.

SCROLL DOWN FOR VIDEO... Great balls of fire: Daenerys Targaryen's ever-growing dragons look set to play a big part in the third season of Game of Thrones

As her companions soar and breathe fire, she is heard saying: 'I shall show you no mercy.'
And just to underline how far she has come from the meek teenager from the show's first series, in another part of the teaser she shows her new boundless confidence.

The blonde dragon maiden, who is played by English actress Emilia Clarke, dismissively tells an enemy: 'Explain to me how you propose to defeat us.'

It is clear the once adorable creatures are becoming ever more powerful as they mature, and show creator David Benioff said this will become a key thrust of the plot. Ready for action: It seems Daenerys Targaryen is ready to reclaim her birthright and sit on the Iron Throne You and whose army: But if these soldiers stand in her way it will not be long before they are turned extra crispy Sic em Fifi: Men in armour have no chance if they go up against her rapidly growing dragons
He said: 'This is an interesting time for the dragons. When they were born they were adorable.

'Last season, as you say, they were still kind of cute. But now they’re turning into proper flying dragons.

'One of the interesting things about the books, and hopefully the show, is that the weapons of mass destruction in this world are living breathing things. And as they get older that presents problems.' Plum role: Prior to Game of Thrones Emilia Clarke's most notable appearance was in BBC show Doctors

But there are plenty of other thrilling plot thrusts addressed in the clip, not least of which is the ever increasing mania of King Joffrey.

Increasingly beyond the control of the Lannister family, he is becoming ever crueller as he seems to lurch closer to madness.

He says: 'I am the king! Everyone is mine to torment'

Battle is still ripping through the land of Westeros, and it seems the tide is finally turning on the armies of the north and their leader Robb Stark.

The increasingly desperate self-styled King of the North says: 'Take his home, take his gold, take his power. If we don't do this now, we're lost.' Desperate: The tide of battle finally seems to be turning of self-styled king of the north Robb Stark Weary: It seems battle fatigue and tactical blunders could spell the end of their journey south The madness of King Joffrey: Everyone's least favourite royal seems to get even more unpleasant Key to the kingdom: But his relationship with fiancee Sansa Stark could yet prove vital to peace
But it seems Tyrion Lannister is getting tired of the constant fighting, telling his sister Cersei, 'How long does it go on?;
But he does not get the answer he is looking for when she replies, 'Until we've dealt with all our enemies.'

Several other thrilling plot threads are also hinted at, including a dramatic duel between Jaime Lannister, believed to be the finest swordsman in the land, and Brienne of Tarth.

And there is also a tantalising glimpse of Night's Watch member Jon Snow having an exchange with Mance Rayder, the much feared leader of the people who live in the wilderness north of the kingdom.

The new series of Game of Thrones kicks off on HBO on Easter Sunday, March 31. Will it never end: Even schemer Tyrion Lannister is tired of the constant war engulfing the nation Til the end: But his sister Cersei will not be happy until all of her family's enemies are crushed Spectacular: The land of Westeros looks better than ever thanks to the successful show's high production values