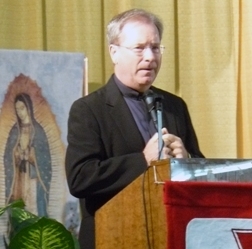 Evil has not fallen out of fashion. Exorcism is a rite developed — and promulgated — to meet a need that still exists, due to more people delving into New Age and occult practices.

And, yes, satanic worshippers are a reality.

“They come in the church and steal the Blessed Sacrament to use in a ‘black mass,’” explained Father Gary Thomas, pastor of Sacred Heart Church in Saratoga, Calif., and the exorcist for the Diocese of San Jose.

He has alerted his fellow priests to this danger — and trained his extraordinary ministers of holy Communion so that they note whether people receiving Communion are actually consuming it, not simply transporting it elsewhere for obscene purposes.

Father Thomas, a priest for 28 years, has even addressed people who appear not to be consuming the Eucharist.

“If I don’t know them, I’ll say, ‘Excuse me, will you please finish consuming the body of Christ in my presence?’” he said.

Father Thomas — the subject of the book The Rite and the 2012 movie of the same name — was one of a half dozen exorcism experts to speak at the Southern California Renewal Communities’ Catholic Renewal Convention held Labor Day weekend in Anaheim, Calif.

In addition to the workshops on healing, the Holy Spirit and prayer, the convention offered two tracks called “Christ Triumphant,” which focused on exorcism and deliverance ministry — a general track and a pastoral track for clergy and lay ministers.

The day preceding the convention, organizers also hosted a “mini-conference” for 175 registered priests and three bishops featuring the expert speakers (among them four active exorcists and one retired exorcist).

Which begs the question: Is exorcism simply a hot topic — or has the need for the rite grown?
It’s certainly a popular subject. The Rite was one of a handful of movies about exorcism released in the last two years, and a short-lived television series on the subject also launched. But that’s far from the point, says Father Thomas.

“There is a greater need for exorcism because there is a greater frequency of the practices of the occult, New Age and Satanism, both on the part of Catholics and other people alike,” he said. Conference speakers explained that  people begin experimenting with other traditions and rituals, often simply out of curiosity. They don’t realize that they are, at the same time, losing their spiritual center and turning away from God.

That being said, exorcists are quick to state that most of the people who come to see them are not possessed.

Father Jeffrey Grob, exorcist for the Archdiocese of Chicago, declines to give numbers of people who come to see him — or people he has exorcized — but says simply, “I see far more people than I need to see.”

Like Father Thomas — who says the vast majority of people who come to see him are dealing with mental-health issues, not issues of possession — Father Grob says that most people who hope to call upon his exorcism expertise are actually dealing with psychological issues, or even with a faith life that has gotten off track.
“Spiritually speaking, they don’t need an exorcist. They need their parish priest; they need a spiritual director,” he said. “They need someone who will get them back in the practice of their faith — bring them back to reality.”

After all, he points out, even if a person is not actually possessed, a focus on darkness and evil can draw him into horrifying actions, even including satanic worship and ritualistic murder.
One example comes quickly to Father Grob’s mind: the 1980 murder of Sister Margaret Ann Pahl, a high-profile crime in Toledo, Ohio. The nun had been strangled and stabbed multiple times in the chapel of a hospital, which she was preparing for the Easter vigil Mass. When the case was reopened in 2003, the hospital chaplain — Father Gerald Robinson — was charged with her murder, and evidence of a cult of ritualistic satanic abuse was uncovered. Father Grob was called as an expert witness to answer questions about cult activity and satanic worship.
“It’s proof positive how far afoul things can go,” he says. “It’s so unbelievable — people don’t want to think about it.

Those attending the “Christ Triumphant” tracks of the recent convention were not hoping for sensational “Amityville Horror”-style stories. On the contrary, many said they have already experienced the presence of evil and have no need of corroborating stories from others. They simply want to learn how they can help in this important work. (Exorcists can only be priests, but laypeople can take part in the ministry by joining a prayer team or supporting the diocesan exorcist in other ways. Father Thomas, for instance, works with a medical doctor, a clinical psychiatrist and a psychologist as he discerns whether a “client” is suffering from a demonic possession or from a mental or physical disorder.)

“I want the tools to be able to pray for people I feel are being afflicted,” said Jean Cordero, a parishioner at American Martyrs Church in Manhattan Beach, Calif., who listened raptly to Father Thomas’ opening-day presentation.

Similarly, Father Art Najera — currently working in the Diocese of Sacramento, Calif. — attended the convention to gain knowledge he expects to find useful as he ministers in his parish. People sometimes call to request their houses be blessed because they are experiencing strange phenomena there, he explained.

“The reality is the devil is more active now,” he said simply.

Despite the need for exorcism and recent media attention to the rite and the priests who administer it, the number of exorcists is small. There are more than 180 dioceses in the United States, for instance, but only about 60 known exorcists, says Father Thomas.

Speakers at the recent conference noted that not all Catholics properly understand the rite, and many tend to dismiss it as unnecessary.

But one need only read the Bible to see that Jesus himself was an exorcist, casting out demons from those possessed by them.

“It is the Church’s responsibility to provide the rite of exorcism when it is needed,” said Father Grob. “Our work is to return an afflicted soul back to the body of Christ.”
Register correspondent Elisabeth Deffner writes from Orange, California.
Posted by Wendy, the NOT so good Witch at 7:00 AM