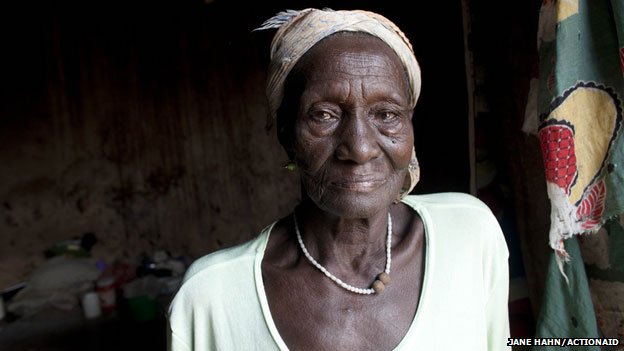 A rusty motorbike speeds across the vast dry savannah of Ghana's impoverished northern region, leaving a cloud of reddish dust in its wake. Arriving at a small group of round thatched huts, the young motorcyclist helps his old mother to dismount to begin her new life in exile.When misfortune hits a village, there is a tendency in some countries to suspect a "witch" of casting a spell. In Ghana, outspoken or eccentric women may also be accused of witchcraft - and forced to live out their days together in witch camps.
Frail 82-year-old Samata Abdulai has arrived at the village of Kukuo, one of Ghana's six witch camps, where women accused of witchcraft seek refuge from beating, torture or lynching.
The camps are said to have come into existence more than 100 years ago, when village chiefs decided to establish isolated safe areas for the women. They are run by tindanas, leaders capable of cleansing an accused woman so that not only is the community protected from any witchcraft but the woman herself is safe from vigilantes.
Today they are still run by local chiefs, and accommodate up to 1,000 women in spartan huts with no electricity or running water, and roofs that leak.

They survive by collecting firewood, selling little bags of peanuts or working in nearby farms.For water, the inhabitants of the Kukuo camp walk three miles each day to the River Otti, struggling back uphill with heavy pots of water. It's an intolerable way for an elderly woman to live, but it's a life they are prepared to endure so long as they are safe.
Samata lived some 40km (24 miles) away in the village of Bulli. There she spent her autumn years caring for her twin grandchildren while her daughter worked in the fields.
It was a happy, fulfilled existence, a gentle winding down after a long working life as a second-hand clothes trader. Then suddenly one day one of her brothers came to warn her that villagers had begun blaming her for the death of her niece, a young girl on whom Samata was accused of putting a spell. 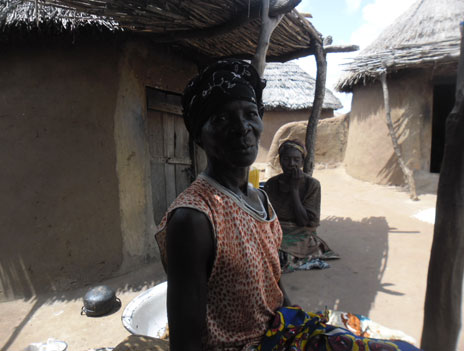 Sisters Safia, left, and Samata, at Kukuo
"I was confused and filled with fear because I knew I was innocent," she says. "But I know that once people call you a witch your life is in danger and so without waiting to pick up any of my belongings, I just fled from the village."
Continue reading the main story

The witch camps appear to be unique to northern Ghana. But Ghana shares with other African countries an endemic belief in witchcraft with illness, drought, fires and other natural disasters blamed on black magic. The alleged witches are nearly always elderly.
An ActionAid report on witch camps, published this week, says that more than 70% of residents in Kukuo camp were accused and banished after their husbands died - suggesting that witchcraft allegations are a way of enabling the family to take control of the widow's property.
"The camps are a dramatic manifestation of the status of women in Ghana," says Professor Dzodzi Tsikata of the University of Ghana. "Older women become a target because they are no longer useful to society."
Women who do not conform to society's expectations also fall victim to the accusations of witchcraft, according to Lamnatu Adam of the women's rights group Songtaba.
Continue reading the main story

"Women are expected to be submissive so once you start to be outspoken in your views or even successful in your trade, people assume you must be possessed."
One of Samata's younger sisters, 52-year-old Safia, is also living at Kukuo. She first came here to join her own mother and grandmother, both of them banished from the community for the same reason.
"They are not witches," Safia says. "This is just hatred, jealousy and a way to get rid of you."
Like most members of the witch camps, including Samata, Safia believes in the existence of witches but feels many women have been unfairly accused. 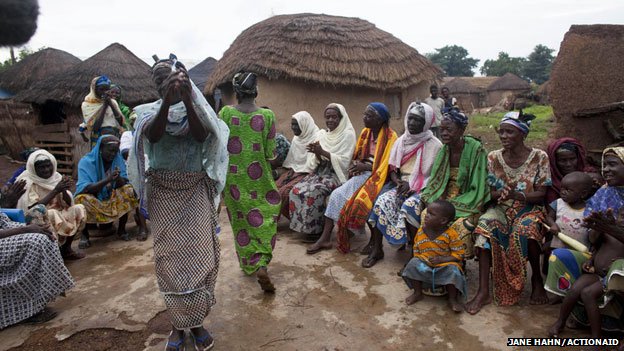 Eccentric behaviour may also be interpreted as evidence of spirit-possession.
"In traditional communities there is no real understanding of depression or dementia," says Dr Akwesi Osei, chief psychiatrist at the Ghana health service, who claims a majority of the women in the camps have some sort of mental illness.
The Ghanaian government sees the camps as a stain on the reputation of one of the most progressive democratic and economically vibrant nations in Africa, and said last year it would move quickly to disband them, possibly in 2012.
But sending the women back to their home villages now would be fraught with danger.

"We are going to have to disabuse people's minds and that takes a long time.""We have to do a lot of work with their communities so that they are able to return without being lynched or subjected to reaccusation, for example if a cow jumps over a fence and knocks down something," says Adwoa Kwateng-Kluvitse, ActionAid's country director in Ghana.
In her view, it will take 10 or 20 years.
At Kukuo, Samata has to undergo a ritual which the entire community believes will determine whether or not she is guilty. She has to buy a brightly coloured chicken to offer the resident fetish priest.
The old priest squats on the ground uttering incantations before cutting the chicken's throat. Samata waits anxiously as the chicken flutters in its death throes waiting to see how it falls.
It lands on its back, a sign that Samata is innocent. With smiles all round, she sprinkles holy water over herself and those gathered to witness the ceremony. She now feels she has been vindicated.
If she had been found guilty she would have been forced to submit to another, far worse ritual cleansing ceremony - drinking a concoction of chicken blood, monkey skulls and soil. A woman must consume this without falling ill within seven days, in order for the exorcism to be deemed effective. If not, she must take it again.
But this doesn't mean Samata can go home. Even though she has been proved innocent, the beliefs which have condemned her to a life of exile are so deeply entrenched she may never be able to return safely.
"When you are accused of witchcraft, it's a loss of dignity," says Samata. "And to be honest, I just feel like ending my own life."
Her greatest sadness is that she will never see her grandchildren again. "I worry about who is going to look after the twins," she says in a quiet voice. "I was the one who bathed and put them to bed. Who will do that now?"
Posted by Wendy, the NOT so good Witch at 12:25 PM