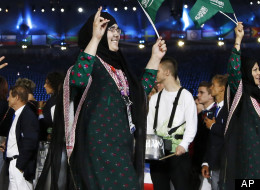 **So proud!  Don't let the clerics take you a step back...
CAIRO -- There was no way Alaa al-Mizyen, a 22-year-old Saudi investment consultant, was missing this Olympic match. While her family slept in late Friday morning, she alone was awake and glued to the TV.
It was, after all, her first ever opportunity to cheer a Saudi woman in the world's biggest sporting event.
The participation of Saudi judo player Wojdan Ali Seraj Abdulrahim Shahrkhani had raised the scorn of the kingdom's ultraconservative Islamic clerics, who said she was dishonoring herself by fighting in front of men, including the male referee and judges. And the match Friday was a swift defeat for Shahrkhani: The teenager was thrown by her Puerto Rican opponent in just over a minute.
But for her supporters, it was an enduring, landmark victory.
Shahrkhani was taking a stand against culture and customs that have little to do with Islam but are used to justify hardline interpretations that restrict women, al-Mizyen said.
"There is a very fine line between religion and culture and customs. People are holding so tightly to customs and traditions and using Islam to defend them," she said, speaking by telephone from the Saudi Red Sea coastal city of Jiddah.
The judo match wasn't shown live on Saudi state TV or many other Saudi-owned satellite channels, though it was unclear if that was because of the controversy swirling around her. Other state-owned stations in the region focused instead on other athletes or regional crises. But the match was shown on several Arab satellite sports channels.
Many in Saudi Arabia and the Gulf region missed the fleeting moment altogether simply because the match coincided with the middle of traditional Friday prayers.
But her supporters watched closely.
Posted by Wendy, the NOT so good Witch at 1:13 PM