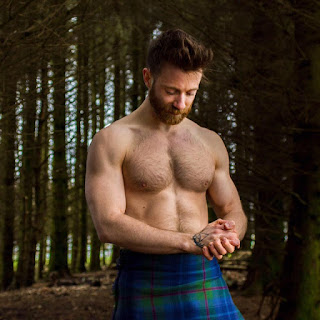 This is not OK. Remember that captivating video that went viral? We loved it, and we’re pretty sure most of the internet did, too—with its 50 million+ views. But since the video went viral, the yogi behind it says he’s received some seriously terrible threats.
Yogi Finlay Wilson says he received a  letter left on his doorstep. “I was warned in this letter that I should leave my home, along with me and my dog, because I was gay,” Wilson said in an interview with BBC Scotland’s The Social.
“The writers of the letter claimed that they’d been watching me for quite some time, that they’re watching my social media.”
In a separate interview with the BBC, Wilson explains how he was full of fear and panic at first, but then  and anger.
“I was upset at first, but now I am furious, because someone’s aim is to intimidate me and terrorise[sic] me into leaving my home because of their own bigoted beliefs.
“The  do this sort of thing need to know that their views are unacceptable and the majority of people won’t tolerate it.”
The threat is being treated by police as a hate crime, as it  should.
A police spokesperson said: “Police Scotland does not tolerate hate crime in any form and everyone has the right to live safely and without fear.”
We’re assuming the offenders are not yogis, but you know, who knows these days? It’s downright awful that this is happening in today’s world. We stand with you against hate, Finlay Wilson, and want you to know that others do, too.
If you feel inclined to show your support for Finlay, please leave a comment below, or send him a message on facebook.
Posted by Wendy, the NOT so good Witch at 10:25 PM